Highton J, Guévremont D, Thomson J, Carlisle B, Tucker I. A trial of clodronate-liposomes as anti-macrophage treatment in a sheep model of arthritis.Clin. Exp. Rheumatol. 1999 Jan;17(1):43–8.

Methods
Arthritis was induced in the right hock joint (day 0). We were able to demonstrate uptake of liposomes into macrophages within the inflamed joint lining. On day 7, sheep were given a single intra-articular injection of clodronate liposomes (group 1, n = 10) or saline liposomes (group 2, n = 10). A further 6 sheep (group 3) had no arthritis and no treatment.

Results
No difference in joint diameter was observed between the sheep in group 1 (clodronate) and group 2 (saline treated). Both groups had joint swelling which persisted until the end of the trial (day 20). Histologic scoring was also similar in group 1 and group 2 animals, and both were worse than group 3.

OBJECTIVE
To assess the clinical and histologic effects of an intraarticular application of low-dose (non-cytotoxic) liposomal clodronate in established antigen-induced monarthritis (AIA) in rabbits.

RESULTS
Liposomal clodronate-treated rabbits showed a reduction and delay in joint swelling during the first 3 injections. Expression of matrix-bound (solubilized) TNFα, lining cell hyperplasia, and levels of RAM-11+ macrophages were low in the synovium of the liposomal clodronate treatment group, but the proportion of apoptotic lining cells was not affected. The radiologic score was low at the end of weeks 2 and 4, but at 8 weeks, no difference, compared with controls, was found in pannus formation or in the extent of joint erosion; also, joint swelling was higher than before initiation of treatment. Injections of liposomal clodronate prevented cartilage proteoglycan loss, which was significant in the superficial zone only. TACE activity was not inhibited by clodronate.

CONCLUSION
Liposomal clodronate had temporary antiinflammatory and antierosive effects on established AIA in rabbits. Over the long-term, the loss of cartilage proteoglycans was halted. This observed treatment effect may be related to the inhibition of TNFα production and processing in the synovium.

Methods. Two rat models of OA were used: the monoiodoacetate (MIA) model, which is a fast progressing biochemical induced model and the anterior cruciate ligament transaction (ACLT) model that induces OA at a slower pace. Images were obtained using high resolution small animal SPECT/CT. Specificity of the technique was tested by eradicating macrophages using clodronate laden liposomes and blockade of the FR-β by cold folic acid.

Results. The MIA model had a high initial activation with a peak after two weeks which disappeared after eight weeks. The ACLT model showed less activation but was still active 12 weeks after induction. The technique allowed monitoring of the disease process over time, in which late stage disease showed less macrophage activation than early onset stages especially in the fast progressing MIA model for OA.

Conclusion. Macrophage activation in experimental OA could clearly be demonstrated and monitored by the folate radiotracer. The high resolution, high sensitivity and high specificity of the used technique allowed clear localisation of macrophage activity in a disease model, which is not known for abundant macrophage involvement.

Conclusion. Acute mBSA/IL-1–induced arthritis is dependent on IL-2 and IL-4, but not IFNγ. In vivo, the Th1/Th2 paradigm may be distorted by the presence of macrophage-derived cytokines such as IL-1. Synovial lining macrophages are essential in mBSA/IL-1–induced arthritis. However, the requirement for macrophage-derived cytokines is selective; that is, IL-6, LIF, and especially GM-CSF are necessary, but IL-12, IL-23, and OSM are dispensable. IL-1 may therefore influence both adaptive and innate immune mechanisms in acute inflammatory arthritis.

In this study we investigated mechanisms involved in the chronic character of experimental collagen type II induced arthritis (CIA). We compared the knee joints of mouse strains which are prone to develop this autoimmune disease (DBA/1, B10RIII) with other nonsusceptible mouse strains (C57Bl/6, BALB/c) in their reaction to different stimuli: immune complexes (IC), zymosan and streptococcal cell walls (SCW). Inflammation was evaluated by 99m Tc uptake measurements and in haematoxylin- and eosin-stained knee-joint sections. Passively induced immune complex mediated arthritis (ICA) in knee joints of C57Bl/6 and BALB/c mice, showed moderate cell influx at day 3, whereas at day 7 only minor amounts of inflammatory cells were observed. In contrast, in arthritic DBA/1 and, to a lesser extent, in B10.RIII joints, a tremendous cell influx was observed at day 3 and even at day 14 there was still significant synovitis. In contrast, if arthritis was elicited by intra-articular injection of zymosan or SCW in C57Bl/6 and DBA/1, the course of inflammation was similar in both strains and no chronic inflammation developed. In line with severe arthritis, chemotactic factor production was dramatically enhanced in ICA in DBA/1 mice, and a prolonged production of IL-1 was evident. When IL-1 was neutralized before or during the ICA using specific anti-IL-1, antibodies, inflammation could be blocked completely. Single or multiple injection of IL-1 in the knee joint of C57Bl/6 or DBA/1 showed comparable inflammation, indicating that the chemotactic response per se is comparable in both strains. No prolonged production of IL-1 was found during zymosan or SCW arthritis. Selective removal of macrophages from the synovial intima prior to ICA induction (using clodronate-containing liposomes) prevented the onset of inflammation in C57Bl/6 and DBA/1 mice. It can be concluded that immune complexes, but not zymosan or SCW, cause a more severe and chronic arthritis in mouse strains which are susceptible for collagen type II autoimmune arthritis. This is due to higher and prolonged expression of IL-1 and chemotactic factors, caused by stimulation with immune complexes. The interaction of IC with lining macrophages probably plays a dominant role in development of chronicity. 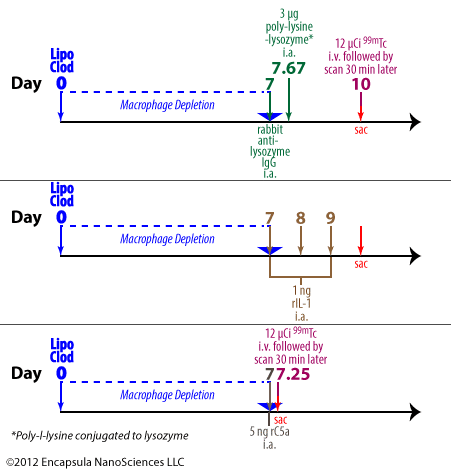 OBJECTIVE: To investigate whether local removal of phagocytic synovial lining cells (SLCs) from the knee joint before onset of collagen type II arthritis has an effect on development of cartilage destruction.

METHODS: Phagocytic SLCs were selectively depleted by a single injection of clodronate laden liposomes in the knee joint seven days before induction of collagen type II arthritis (CIA). Clodronate laden liposomes were given in one knee joint either alone or in combination with a short-term oral treatment of dexamethasone. Cartilage damage including proteoglycan depletion and chondrocyte death was measured in total knee joints sections stained with safranin-o or haematoxylin.

RESULTS: Local removal of phagocytic SLCs, seven days before arthritis onset, prevented cell influx for the larger part. Chondrocyte death was significantly decreased in the SLC depleted arthritic joint both at an early (6 days) and late (12 days) time point after CIA induction. However, depletion of proteoglycans from femoral and patellar cartilage layers was not prevented. If the mild acute inflammation caused by a single clodronate laden liposome injection in the left knee joint, was blocked by a short-term (on consecutive days 9, 8, 7, 6, 5 before CIA onset) oral treatment with dexamethasone, cell influx, but also proteoglycan depletion was almost completely blocked. In the contralateral control right knee joint prominent cell influx and severe cartilage damage was observed, indicating that there was no effect of dexamethasone anymore at the onset of CIA.

CONCLUSIONS: This study shows that removal of phagocytic lining cells before CIA induction, particularly in the presence of a short-term treatment with dexamethasone, decreases cartilage destruction.

Experimental treatment timeline from van Lent, et. al., 1996. Arthritis onset is set at day 28 when the LPS is dosed. Macroscopic paw edema is visible from day 30.

Objective . To investigate the in vivo role of phagocytic synovial lining cells in the local expression of inflammation in type II collagen–induced arthritis (CIA) in DBA/1J mice.

Results . In clodronate-laden liposome–treated, lining-depleted knee joints, there was significantly decreased inflammation compared with controls. Cell influx into the synovium was markedly decreased. Expression of IL-1 mRNA in the synovium was significantly reduced. IL-1 was detected only in some cells in the deeper synovial layer, in contrast to controls, in which large numbers of cells in the deeper synovial layer were stained. In synovial washouts from lining-depleted knee joints, biologically active IL-1 levels were reduced by 40% at 6 hours after arthritis induction. Most strikingly, chemotactic activity was highly decreased in these synovial washout samples. When IL-1 or TNFα was injected into the knee joints of immunized mice in which arthritis was not yet expressed, arthritis was not induced in the lining-depleted joints, whereas marked cell influx was found in control joints.

[toggle_content title=”Abstract”]To investigate the role of the ovarian macrophage population in ovulation, we examined the effect of depleting this population using liposome-encapsulated clodronate. Clodronate liposomes, saline liposomes, or saline alone was injected under the ovarian bursa in gonadotropin-primed adult mice, either 84 h (Day −3) or 36 h (Day −1) before ovulation. Ovulation rates were determined by counting the number of oocytes released. The numbers of graafian follicles and corpora lutea were also counted immediately before and after ovulation. Macrophage distribution within the theca and stroma of preovulatory ovaries was examined by immunohistochemistry with specific monoclonal antibodies to the macrophage antigens macrosialin, major histocompatability complex class II (Ia), and F4/80. Injection of clodronate liposomes on Day −1 did not affect ovulation rates, whereas administration on Day −3 caused a significant reduction in ovulation rate (mean oocytes ovulated = 5.25 ± 0.6 from clodronate liposome-treated ovaries and 9.13 ± 0.9 from saline-treated ovaries, respectively, P < 0.05). The numbers of macrosialin-positive macrophages present in the theca at ovulation were reduced by treatment with clodronate liposomes on Day −1, and treatment on Day −3 reduced the numbers of Ia-positive and macrosialin-positive macrophages present in the theca. When the subsequent ovarian cycles were examined by vaginal smearing, the metestrous-2/diestrous stage was found to be extended in clodronate liposome-treated animals (7.5 ± 1.3 days vs. 3.4 ± 0.4 days for saline liposome-treated animals, P < 0.05). These results suggest that thecal macrophages may be involved in the regulation of follicular growth and rupture, as well as being important for the normal progression of the estrous cycle.[/toggle_content] [toggle_content title=”Clodronate Liposome Parameters”] [custom_table] [/custom_table] [/toggle_content] [toggle_content title=”Animals and Dosing”] [custom_table]

1Paper states that C57B16 mice were used; we assume that this is an error.

[toggle_content title=”Abstract”]Chronic inflammation of the joint is characterized by the long-term presence of macrophage-like cells in the multilayered synovium. We examined whether synovial phagocytic cells which have settled in the inflamed lining layer play a role in perpetuating synovitis by selectively eliminating them from chronically arthritic murine knee joints. For this purpose we used liposomes encapsulating the drug dichloromethylene diphosphonate (CL2MDP, Clodronate). Injection of CL2MDP-liposomes into acutely inflamed knee joints (6h, 1 and 3 days) had no significant effect on late chronic synovitis (14 and 21 days after arthritis induction) as observed in haematoxylin and eosin-stained total knee joint sections. Liposomes did not reach the lining layer, as seen with fluorescent liposomes. Additional in vitro studies revealed that activated polymorphs were not affected by CL2MDP-liposomes within 16 h of incubation. Liposomes formed clusters, however, in the presence of intact polymorphs or extracts of polymorphs. In contrast, a significant down-regulation of late synovitis was observed if CL2MDP-liposomes were given during the chronic phase (day 7). Phosphate-buffered saline (PBS) alone or PBS-liposomes had no effect on synovitis. A single injection of CL2MDP-liposomes eliminated many of the phagocytic lining cells and deeper lying inflammatory cells for at least 4 weeks. Free CL2MDP had a minor but significant effect. This study indicates that phagocytic synovial lining cells play an important role in propagating chronic synovitis. To eliminate them from inflamed knee joints, CL2MDP-liposomes should be injected in the chronic and not in the early arthritic phase.[/toggle_content] [toggle_content title=”Clodronate Liposome Parameters”] [custom_table]

1This number is very high for the amount of lipid and the prep method cited. Typically this prep would contain around 5 mg/ml clodronate.